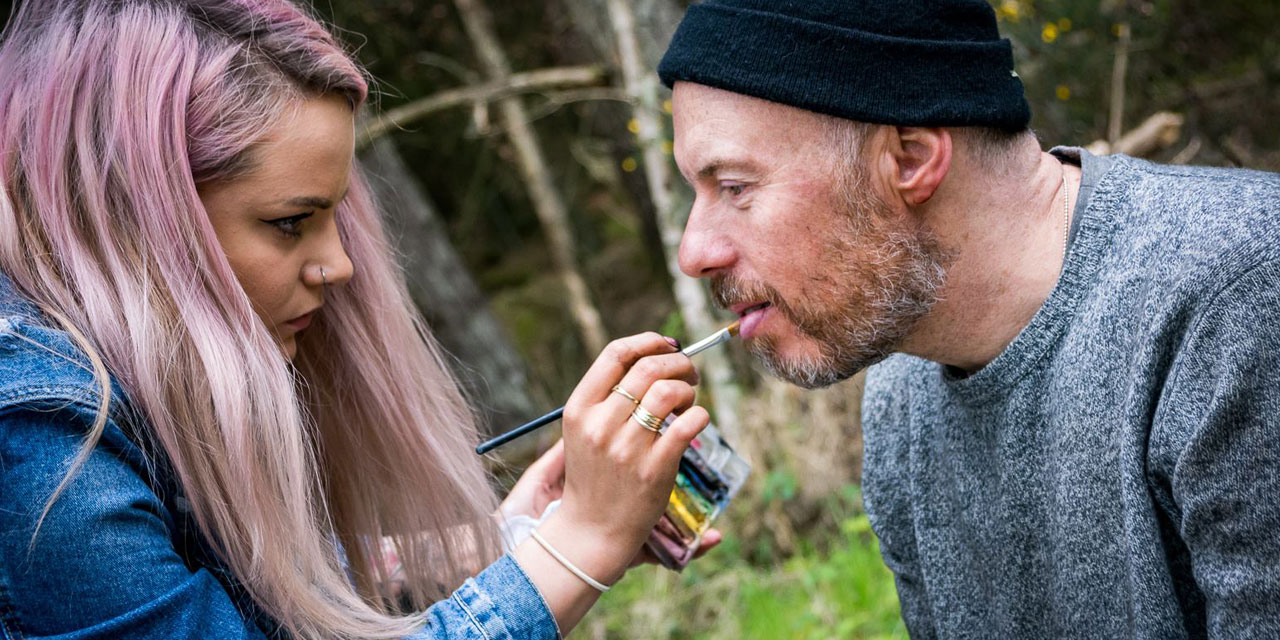 We speak to Kat Morgan, a make up artist for TV and film. Kat’s impressive work has taken her to London and Norway, yet she still feels at home in Fife.

Tell us a bit about yourself.

My name is Kat Morgan, born and bred in fife. Long before makeup I studied to be an artist, mainly using oils. What I do now isn’t completely worlds apart. I’ve been a makeup artist in TV and film for 8 years now and I’ve worked on some amazing projects with people who have become an integral part of my life.

You’ve been involved in a number of projects; what have been some of the projects you’ve worked on?

I’ve recently finished working on Jan 22nd for an HBO/BBC TV series set to air this autumn. A couple years ago, I worked on Netflix series The Innocents. We filmed that series split between London, Yorkshire and Norway. I’m currently up for my second feature film doing the makeup design which is incredibly exciting.

Did you study formally or are you mostly self-taught?

I studied at Edinburgh College, what was formally the Telford College campus. With TV and film I don’t really believe about being self taught. There’s no shame in learning from someone who has spent their life learning from experience. I think it’s a vital part of entering this industry.

What were your first experiences on a set like?

When you first begin makeup in film you start right at the bottom. Trainee level and you’ll be quite lucky if you even get to pick up a makeup brush. Being on set for the first time was amazing. Absolute magic. It’s very daunting though and my advice to anyone is always be self aware. You’re entering in to a world that is not yours. Always be cautious, polite and helpful.

What challenges are there in making your work a career?

I’m not going to sugar coat this career. It’s incredibly hard to get your foot in the door and really after 7 years of doing the job I’m only just getting to a place where I feel comfortable financially. People need to realise that starting out you’ll be worked to the bone with little to no money.  It’s just the way it is, you have to work damn hard.

Do you apply your skills outside of the world of TV and film?

I think you do gain a lot of transferable skills. It certainly teaches you the value of time keeping and working to deadlines. Also working under extreme pressure and scrutiny.

You’ve travelled a lot to work on different projects. Do you enjoy the travelling? What challenges does that bring?

I’ve travelled a little with work. Norway was the furthest I’ve gone. We were there for 5 weeks and didn’t have time to come home really. I work a lot in London. There’s so many challenges with that sort of work. You sacrifice a lot to do it, birthdays, events, weekends away, because the job comes first.

In the years I’ve worked though I’m finally managing to get to a healthy balance between work and real life and I think it’s important to learn. In the first few years it’s so difficult though. Even just to go on holiday the fear of leaving and missing out on work was too great. Now I don’t feel like that’s the case anymore.

How do you prepare for a new project?

Preparing for a new project varies dependant on what role I’ll be doing and what’s involved. I’m designing a lot more of my own projects these days. So it’s a lot more involved with script breakdowns, characters designs and production meetings. For jobs where I’m hired as a makeup artist it’s a lot less demanding in terms of prep. I just love being so involved with a project though. So I prefer designing.

Both make up and costume design can vary from subtle to exaggerated. Which style do you prefer?

I think there’s real skill in subtlety. Making someone look as if they have nothing on at all, knowing fine well you’ve spent 30 minutes styling them. I love a mix of both. I’ve worked jobs where it’s full prosthetics and you’re in from the crack of dawn and don’t leave until late at night. It can be tough. I find a good mix of jobs keeps the work interesting and can also keep you sane.

Are your supplies expensive? Can you ever have enough?

Makeup and hair tools are expensive. There’s no getting round it. The good thing with it at least is when you’re self employed it comes back off as a tax expense. When you begin designing as well you can build kit through production budgets when you need more kit for specific actors, looks etc.

How important do you think team chemistry is on set?

I love being on set. Especially with the right crew. Being involved and the banter. It still excites me. When it comes to team chemistry I think it’s really important. People you can get on with, have highs and lows with and who understand that mistakes can be made. It makes the job go smoother and the days pass quickly.

Tell us about a particularly memorable moment while on set.

One of my favourite on set memories was when I worked on the series Clique II. It was a Friday afternoon and it was the last day before we finished up the first block of episodes. The 1st AD decided to do a job swap for the entire crew. One of the sparks and one of the art dept got the two roles of makeup so I gave them my kit and off they went applying heavy HEAVY makeup to another spark, who got roped in to be the lead cast member! The lead cast member became the grip, the costume stand by became the DOP. I got runner. It was utterly hilarious; I wonder if they ever shot what we did?

Have there been any projects you’ve found particularly challenging?

In the last six years, I’ve worked with Scottish contemporary artist Rachel Maclean. I do her makeup/prosthetics/wigs. It’s by far one of the best jobs I get to be apart of. We’ve had loads of challenges with these films.

So many times I’ve had to think on my feet and get things ready. For instance, in the film SPITE YOUR FACE. We had a prosthetic nose made by the wonderful Kristyan Mallet. We had loads of different size noses made, the longest being about two foot long. Once applied to Rachel we realised it would sit straight by itself. The piece was made to perfection but at the end of the day gravity was against us. So we ended up piercing the nose with thin guide wire and attaching it an an angle to her costume hat. It worked an absolute treat and thank God it worked!

What are your thoughts on the filmmaking community in Scotland?

I think the Scottish film industry is definitely on the rise. There are more opportunities presenting themselves and generated the interest of production companies coming here. The community up here is small in comparison to the likes on London but to me it feels busy.

It is getting better, but the best advice I could give is learn to drive and know you’ll most likely have to commute to Edinburgh and Glasgow. I still live in Fife because I love being somewhere smaller and coastal and driving doesn’t bother me.

Tell us a bit about any other ways you like to create and collaborate.

I still love to paint. I’ve started oil painting again in my free time as well as trying other creative crafts like pottery. If you know my work you know I’m also an avid body painter. For me when I didn’t have my house and have the space to paint on canvas, body painting was the next best step for me. I absolutely adore it.

Of course right now we’re going through the coronavirus lockdown, so all filmmaking has been shut down. I’ve got some pretty amazing jobs in the pipeline so as soon as this blows over I really can’t wait to get back to work!

What advice would you give someone new to the world of make up in film, or to filmmaking in general?

This job isn’t for the faint hearted. You will not walk out of college in to a good paying makeup artist role. It takes years of learning, which looking back I learned nothing in college about set etiquette and things I would actually need for this job. You need to always remain humble, to remain open to new things and to know for the first few years you’ll have no money to your name and probably sacrifice a lot of social events. It’s a hard job but I love every aspect of what I do. Perseverance, motivation and a damn good attitude is the only way you’ll survive.

Your favourite film and why.

Now that’s a tough one! I’m huge in to 80s B-horror: Brain Damage, Evil Dead, The Thing, Society, They Live, etc. Also; really love a Tarantino, especially Pulp Fiction. I just love the colours he uses. Also Grand Budapest Hotel and to be honest that needs no reasoning. 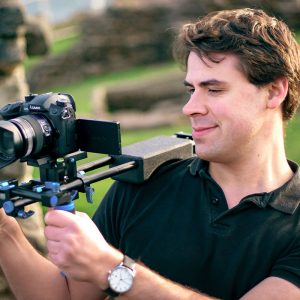 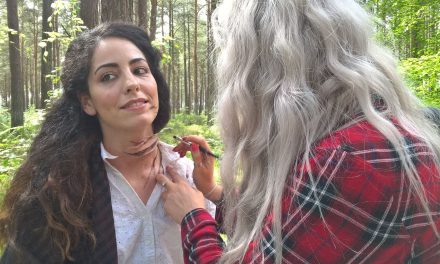 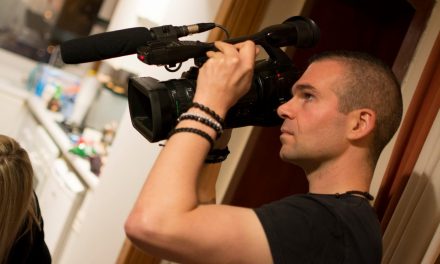 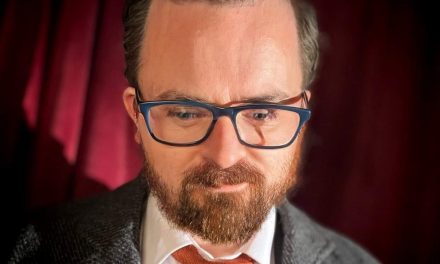 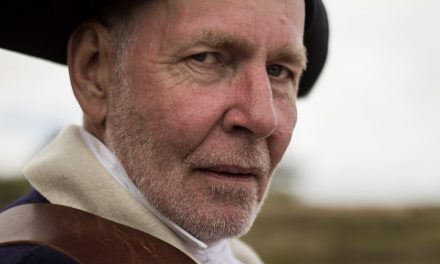